Can hotels win the booking?

In the battle to win customers to direct channels, hotels need to adopt a multi-pronged strategy finds new report.

Hotels are struggling to win direct bookings in a hyper-competitive age of online travel booking. However, there is still room to improve performance and make major headway in this important arena by reaching consumers in the channels that matter and perfecting those channels for maximum effectiveness finds a new report. The State of Hospitality Distribution: Direct report, which is free to download now, notes that hotels that focus the efforts on a carefully crafted strategy across Search Engine Optimisation (SEO), metasearch, their own sites, loyalty programs and social media and User Generated Content (UGC) stand a good chance of boosting their direct bookings.

Looking at what tactics are viewed as most critical amongst the travel industry, SEO, content marketing and social are seen as the most critical for customer acquisition. The report notes an EyeforTravel industry survey, which found that travel suppliers reported that their top area of investment for customer acquisition is SEO, at 54% of respondents, followed by content marketing at just under half of respondents and then social media and blogs. Reinforcing the importance of SEO and social, as well the pervasiveness of the most powerful advertising networks on the internet, 63.7% of travel suppliers said that Facebook and Google were positive influences that help their businesses.

It is therefore critical that hoteliers address these fields. When it comes to SEO, the game has to be played cleverly as more generic keywords reaching the broadest segment of the market are already likely to be subject to fierce bidding and therefore difficult to generate strong returns from. The report suggests that hoteliers need to research their field of keywords, focusing on long-tail keywords more specific to their properties, as well as the following:
●        Move to a responsive website: Responsive sites help with ranking as it is easier for search engines to crawl and uses a single URL, and Google has tweaked its algorithm with the release of Hummingbird to be more focused on the mobile experience.
●        Look at code and content carefully to reduce page load times: Look at page weight and figure out where the biggest strains are as well as where there might be smaller savings. Approach imagery in a smart manner, looking to compress, run off an image server, and combine background images into a single image to reduce requests. Consider a Content Delivery Network (CDN) to reduce latency.
●        Think about user purpose at all stages: Consider the user intent at all stages and make it easy for them to navigate to the next step.
●        Create quality, original content: Focus on being trustworthy and authoritative. Poorly conceived and created content will mean low dwell times, a lack of backlinks, high bounce rates, and poor ClickThrough Rates (CTRs). Create content hubs related to your destinations or offerings that interlink with each other and answer specific things that visitors would want to know about the area or service.
●        Remember search engines are mostly text-based and you need to make their lives easy: Look at underlying structural data that can help engines and therefore your position. These include: meta titles, meta descriptions and header tags, particularly the H1 tag, that use keywords appropriately and help describe the page; alt tags, related file names and descriptions for key images; and provision of a sitemap to Google.
●        Set up a Google Search Console account: Google’s Search Console is an incredibly helpful tool to track site performance and organic SEO.

Alongside SEO, social is highly influential, particularly in initial phases of thinking about and researching a trip, most notably among younger consumers. “Social media plays a big part in who we are and how we reach new audiences,” said Kate Martin, General Manager of the Luma Hotel Times Square in New York City. “Because we’re new and hip, we find and connect with customer who appreciate us for being different and social media is a big part of that.”

Jason Lee, Senior Director of Product and Technology at Travel Media Group, finds that social media and in particular Facebook affect all phases of the buying process, with “Facebook delivering the most bang for the buck because there’s nothing like it in the social media sphere.”

Lee’s strategy for hotel clients is to both invest in promoted content and ads and to create content that builds engagement. Consumers will likely use social media as a research tool, going elsewhere to book and largely ignoring Calls to Action (CTAs) except when closely targeted, such as at choice moments of heightened interest. For one hotel client, Lee spent $10 on a Facebook post promoting room availability during dates when a high-profile artist was giving a concert at a venue near the property. Within minutes of the post going live, it was viewed several hundred times, shared 87 times and generated seven room nights.

Some of the above principles for social and search should be applied to the hotel’s website itself, which is perhaps the most crucial element of driving direct bookings. Similar to social, imagery is critical. For Sonesta International Hotel Corporation relaunch of its website it took the route of going “Much more visual that what we had previously,” said Scott Weiler, vice president, marketing and communications at Sonesta. “We commissioned a lot of new photos so that the site would be in lock step with the look and feel of the hotels.”  Much of the website balances a single hero image across the top of a page with tiles that Weiler described as visually providing users with a way of navigating a number of ideas very quickly

Honolulu-based Aqua-Aston Hospitality chose to position itself on its website as a Hawaii destination expert in addition to offering lodging facilities. Travel suggestions are tailored to users’ preferences and content themes change regularly and are tied together with customized itineraries created by local influencers and ambassadors. The company also amasses user data as they spend time exploring the site; that information is used to improve target marketing capabilities, serve up more relevant offers to users and further build its Customer Relationship Management (CRM) system and loyalty program.

It is the last point that is also perhaps being overlooked currently as the report finds that the loyalty program and hotel loyalty in general are not dead.

Loyalty programs continue to drive value for brands, attracting the highest spending consumers, driving positive views of the brand and being a way to reach younger consumers, surprisingly.
Over 90% of travel organizations believe that their loyalty program has had a positive effect on their brand’s perception among consumers according to an EyeforTravel industry survey featured in the report.

The results also note that 78.5% of hoteliers reported that their loyalty program members spent more than the average, with 30.8% reporting that they spend ‘considerably more’. In a consumer survey also within the report, membership for loyalty programs was skewed to higher income brackets, explaining this higher spend. 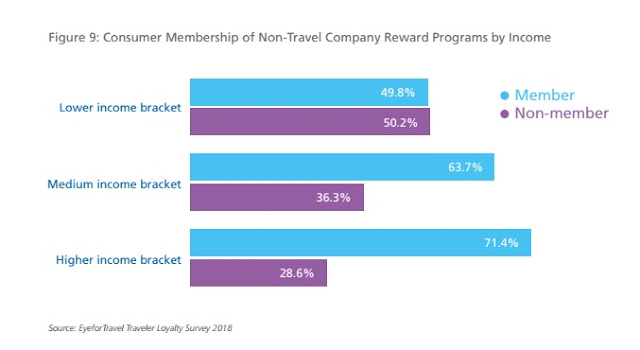 Furthermore, satisfaction regarding hotel loyalty programs was highest among the youngest age group. More than 80% of those aged 18 to 35 and members of at least one program think that hotels provide good or excellent service when it comes to loyalty membership. This declines to 73.8% for those aged 36 to 55 and 65.4% for over 55s.

Even better, the most engaged members are those aged 18-35. In this demographic cohort 70.3% report that they use their rewards on all or most of their journeys, falling to 66.1% from the middle-aged group and then to 51.8% for those over 55

This suggests that there is enormous value to be mined from a well-run loyalty program in targeting key groups of consumers and understanding the brand’s customer base, as well as generating repeat bookings.

For more, download the report now to get the inside track on direct bookings. This report features:

This report is part of the State of Hospitality Distribution Report Series. In this we cover metasearch, direct and OTA channels, assessing the health and landscape of each before giving you the information to maximise their effectiveness. Keep an eye out for our upcoming OTA report and click here for the metasearch report.